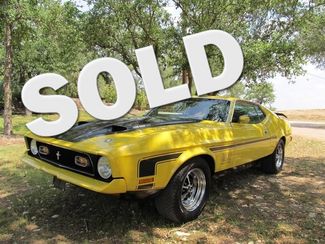 I have been a classic car collector for 35 years, have 70 cars going to sell 60 cars for first time. gccc.us MATCHING #s. This Mustang has stayed in an enclosed garage along with other cars in this private collection and has never been driven in the rain or in anything less than perfect weather. It has been regularly maintained and driven only a few miles each month to keep the moving parts lubricated and in good working condition. This Mustang is one of the rarest because 1971 was the last year the factory installed a "Big Block" in a Mustang. And this is not just a "Big Block" but it's a "Big Block" 429 Cobra Jet (CJ) engine also equipped from the factory with a 4-speed Hurst Shifter transmission. THIS IS THE REAL DEAL!!T According to the MARTI report, this car was originally painted Light Pewter Metallic paint (Ford #3314-A), however, at some point it was repainted yellow, but this repaint is still in very good condition. This car is a true survivor and is in wonderful condition for a car that's 40 years old. It's like a time capsule which takes you back to 1971 just by standing next to it. The undercarriage has very little rust, however, what rust it does have is where you would expect to see it and is surface rust only. So the frame and undercarriage is all in good condition. Should a person want to drive this car on a daily basis or purchase it as an investment, or both, either would be a good choice. Anyone who watches the auctions on TV are reminded everyday as to the excellent investment buy the Mustangs are now and will continue to be in the future. This rare and original 429 cu.in 370 hp engine starts quickly and effortlessly with a mighty roar. This car also has AIR CONDITIONING that blows cold air, power steering, power brakes and power windows. It has a SONY AM/FM digital radio and CD player that sounds great. All the chrome and trim is in good condition and the custom wheels are just as striking. All the glass is intact with no breaks or cracks. The interior is black everywhere and the seats were replaced with high back Ricardo bucket seats that are very comfortable and while there is some wear in a few areas this wear is minor. Film History of the 1971 Ford Mustang Mach 1 The 1971 Ford Mustang Mach 1 was featured in the James Bond film, Diamonds Are Forever (1971). In this film, the Mach 1 was the first vehicle ever filmed to feature the now famous, "two-wheeled tilt" stunt (driven by stunt driver 'Bumps' Willert, Davenport, Iowa) as Bond escapes from pursuing Las Vegas police. One of the stunt cars used in the Bond film was then later featured as Jan Michael Vincent's car in the Charles Bronson film, The Mechanic. DELUXE REPORT Proud to display this symbol [ Copyright Kevin Marti 2010 Thank you for your interest in our services. W e have determined the following,information for your car from the Ford Database we have: VEHICLE ORDER IMAGE DOOR DATA PLATE INFORMATION Serial Number 1F05J137369 1 1971 F Built at Dearborn 05 Mustang Mach I Sportsroof J 429-4V CJ Engine Ram Air 37,369th Ford vehicle scheduled for production at Dearborn 11/70 Built: November, 1970 63R Mustang Mach I Sportsroof V Light Pewter Metallic Paint, Ford #3314-A 5F Ginger Clarion Knit/Corinthian Vinyl Bucket Seats 5 3.50 Traction-Lok Axle Ratio 6 Four-Speed Close Ratio Manual Transmission 90 Export Ordering District ORDER TYPE RETAIL DSO ITEM #: 6879 DEALER#: 9S0E01 FORD MOTOR COMPANY FIGESO 153 HASLEY ST NEWARK NJ 07100 MANUFACTURE D B Y FOR O MOTO R COMPAN Y 137369 11/70 DATE OF MANUFACTURE, THIS VEHICLE BUlLT FOfi EXPORT, N<11 MADE IN US.4 . IMPORTANT DATES: ORDER RECEIVED: CAR SERIALIZED: 10/27/70 BUCKED: 11/03/70 SCHEDULED FOR BUILD: 11/10/70 ACTUALLY BUILT: 11/06/70 RELEASED 11/14/70 SOLD: Your vehicle was ordered with the following features Four-Speed Close Ratio Manual Transmission Traction-Lok Differential F60X15 Wide Oval Belted Raised White Letter Tires Power Steering Sport Deck Rear Seat Power Front Disc Brakes Rear Window Electric Defrost AM/8-Track Stereo Radio Console Deluxe Belts/Warning Light Tinted Glass Complete Power Side Windows Sports Wheel Covers Tachometer Accessory Packaging Your car was actually produced on November 6, 1970 -- four days ahead of schedule STATISTICS *? \??&SfY, Yojust added rear windown black louvers , no pic looks great like this muscle car should!!!!