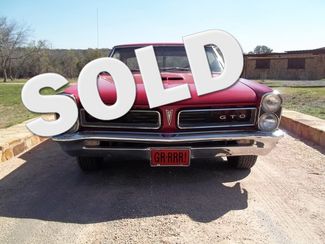 This is a very nice 1965 Pontiac GTO...with 4-speed and A/C. It was restored frame off around 1999 and has been driven so it's not a trailer queen. There are no dings or dents and much of the emblems, chrome and stainless are original. This car does not have the original engine or transmission. It sat in a field in Texas for years before the previous owner restored the car. The cars drive train and the front doghouse was savaged. The car (when new) was built in Freemont California and shipped to Texas. The seller said it had been in the San Antonio area all its life and the A/C are are very rare, especially the 1965 GTO. The book calls the car from very low (needing work) from $25,000 to pristine at $74,500 with the average of $45,000. The color is the original "Monterey Red" and the interior is red as well. PHS documents are available to prove this is a real GTO and factory A/C car. Files show 80,000+ but not sure they are oginial, so it is being sold as unknown. The 389 4BBL carb has headers and old school valve covers. The transmission is an early Muncie 4-speed. The shifter Aden a Hurst. The rear was reported to be a 373. the A/C is factory installed with all the factory components and the car drives really nice for a 44-year old car. The interior was replaced from front to rear and is in great condition. About everything works on the car except the horn and backup lights. The steering wheel was replaced with a wood after market one and looks great. The console is an original but it does have some chrome pitting and the black trim is chipped up a bit.