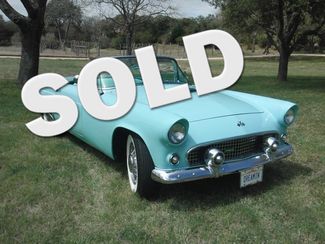 $45,000 OR BEST SERIOUS OFFER 1955 Thunderbird Blue ???Aqua??? Turquoise Hard Top Convertible 292 Thunderbird V8-4BBL , rebuilt in 1985, 8k miles since rebuild Ford-O-Matic Automatic Transmission Air Conditioning Power Steering Power Brakes Power Seat Telescopic Steering 12 Volt Electrical upgrade Engine dress up option Mallory duel point distributor No rust on this car, zero zReceipts and History are available Over $45,000 Invested. receipts available Upgrades Since Car Was Purchased in March of 2014 New Holley 4BBL carburetor Sand, prime and paint touch up areas outside and under the hood Front disc breaks KYB Gas Shock Absorbers front and back Rear sway bar New wheel bearings New tranny and motor mounts Upgrade air-conditioning system converted to the new R134- new hoses, etc. Cooling system upgrade- does not over heat New coker Tires New spider gears in rear end Front end realigned New Aqua seat belts FIRST GENERATION FORD THUNDERBIRD OVERVIEW From Wikipedia, the free encyclopedia: The first generation of the Ford Thunderbird is a two-seat convertible produced by Ford Motor Company for the 1955 to 1957 model years. The first 2-seat Ford since 1938, the Thunderbird was developed at nearly the same time as the Chevrolet Corvette. Rather than becoming a rival to the European sports cars imported into the United States, Ford created a new completely new market segment around the Thunderbird, the personal luxury car. While a performance car in its own right, the Thunderbird focused more on comfort than speed. Until the eleventh-generation Ford Thunderbird was unveiled in 2002, this was the only version of the Thunderbird to be produced as a two-seat convertible. Ford unveiled the Thunderbird at the Detroit Auto Show on February 20, 1954. The first production car came off the line on September 9, 1954, and went on sale on October 22, 1954 as a 1955 model, and sold briskly; 3,500 orders were placed in the first ten days of sale. While only 10,000 were planned, 16,155 were sold in 1955. As standard, the 1955 Ford Thunderbird included a removable fiberglass top; a fabricconvertible top was an option, although commonly specified. The engine was a 292 Y-block V8, which got 18MPG. The car had fender skirts. The exhaust pipes exited through twin bumper guards, which are bolted to the rear bumper. Created to act as a retort to the Chevrolet Corvette, it was also the first mass-produced edition of all the Ford Thunderbird models Factoids, the 1955 Ford Thunderbird outsold the 1955 Corvette in 1955.. A total of 53,166 units were produced for the three model years 1955-1957. It was produced with a Fordomatic automatic or manual overdrive transmissions, and featured four-way powered seats and pushbutton interior door handles. Other unique features were a telescoping steering wheel[5] and a tachometer.[1] Equipped with a V8 engine, the Thunderbird could hit 110-120 mph. It was a smaller two-seat "personal luxury car", compared to many other much larger cars that were on the road in the 1950s. It was designed to be a brisk luxury tourer, and not a sports car.[6]